A marine adventure as my time in Thai Muang, and Thailand, winds down. 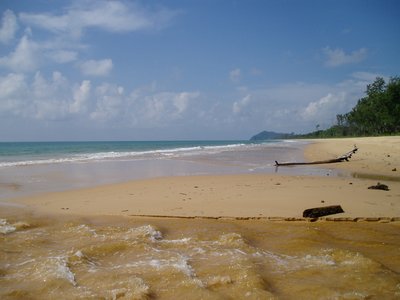 We were staring at each other both equally perplexed at the situation. I was standing there soaking wet with dozens of tropical fish at my feet, tied in little plastic bags like the goldfish you get at a carnival. He was at the steering wheel of the small fishing boat not knowing what to say. I had, after all, been dumped onto his small boat with loads of fish only moments earlier. “Ken, you stay longboat. OK?” my friend Wut had said as the little red dingy from the national park pulled away.
“No problem!” I said as if it was my day job. And there were two. Just me and the fisherman on his little wooden boat. With the mystery black bag.

The morning had started off by speeding around the ocean searching for buoy lines, attaching the buoys, speeding off to the next site (using GPS), snorkeling, finding the line, attaching another buoy, so on and so forth. The buoys were going to be used for…oh that’s right, I had no clue.

After about four hours, Skill stopped the dingy about 100 yards out from the beach avoiding the breakers. Wut and I swam in to a scene I was not used to on the quite beach front of Thai Muang. There were about 40 chairs set up, all of them full with reporters, civilians, and all of the staff from the national park. There was also a man in a military uniform at a podium giving a speech. Under the shade of a tree were about twenty bags of tropical fish and two tanks filled with rare giant clams. I had known we were releasing some fish today from the nearby research center, but I hadn’t expected the pomp and circumstance.

“Ken!” The deputy who was in charge of my volunteer work was coming up to me in a nervous quite whisper. “The director will hand you a giant clam, then go to the boat, then release the clam, ok?” I hadn’t even taken off my fins.

“And take a picture too! Here give me those,” he said as he took my finds and mask. A fun day of snorkeling and swimming had just had the pressure raised a bit. The deputy, I assumed, was the man giving the speech at the podium who had more medals than General Schwarzkopf. There was also the issue of getting the clam to the boat. Breakers of 3-6 ft didn’t have me worried, except that I would be doing it with a rare giant clam in front of forty people. And cameras. Ok, no problem, I said to myself starting to formulate a game plan for the swim. And then everyone broke into applause. The speech was over.

To my relief I was not the only person receiving a clam. As a matter of fact, I didn’t receive a clam at all. Everyone and anyone who wanted to give a bag of fish to someone did so (actually, I didn’t see any clams exchanged). An older farang approached me with a bag of fish and seemed as confused as I was. “I think I give this to you?” he said.
“I think you’d be right!” I replied as I took the bag.
“This one here is Pete. Can you make sure he makes it out there safe?” he joked, pointing to one of the small fish.
“I’ll remind him to swim down, not up.”
“Great. Where are you from?” I told him about volunteering in Thailand, what I did at the national park, and that as far as I knew I was supposed to set up buoys the entire day. He was from the UN, having something to do with tourism and apparently fish. As we followed the crowd to the beach I was relieved again to see that Skill had pulled the red dingy up to shore so that Wut and I wouldn’t have to shuttle the fish back and forth. We set off to the fishing boat waiting 200 yards out, which is where I believe this story started…

So it was me and him. I’m sure he was thinking how great a blog entry this would make, too. Seeing as that he didn’t speak English and his Thai was too quick for me to understand, we each found something to do. I organized the bags of fish and he smoked some tobacco. I still didn’t know what was in the big black bag that had been loaded onto the fishing boat along with all the fish. What could it be?

After about 20 minutes the dingy came back from who knows what and someone I didn’t know yelled, “Ken, you release fish, ok? Fifty meters out. No problem!”.
“Ok. Just…anywhere?”
“Release the fish. Yeah. Fifty meters!” Hey, if they wanted me to do it, no problem. But no guarantees. I mean, these fish didn’t stand much of a chance anyway. They would have to swim through 30 feet of open water down to the reef and they already had the two worst characteristics a fish could have: tiny ‘n shiny. But the fisherman pulled away, steered the boat fifty meters out and I began opening the bags into the ocean. I laughed to myself as I realized the irony of releasing rare fish from a fishing vessel.

After a rendezvous with the red dingy, we continued setting more buoys in the pouring rain. It was fun, but I was getting tired. We couldn’t find the last line snorkeling, so it was time to don our dive gear. Wut (a dive master) got in and headed down, saying that I would meet him down there. With a dive computer low on battery, no idea where my dive buddy was, and struggling with the gear, I embarrassingly said no-go to the diving. At this point Wut had surfaced and had found the line, but I was still embarrassed ( I learned from the best and I don’t like having any troubles diving, especially simple things). Growing tired of finding buoys and having spent almost 8 straight hours on the water, I had had enough.
“I’m going swimming, boys,” I announced.
“You go swim?” Skill and Wut gave me quizzical looks. Skill and I had done a swim before, but that was 1k boats to spot us. This was about 50% farther in a steady downpour.
“Yeah. Mask, fins. No problem. Mai lom,” I said, indicating that there was no wind.
“Ok, we check on you later.”
“Sounds good. See ya later!” I said as I rolled of the small boat. The current was easy, there was little wind and I had fins and a wet suit for extra buoyancy. It felt good to exercise. After a great day, I enjoyed a slow easy swim to shore, feeling the cool fresh rain on my face as I swam through the warm clear ocean below.

P.S. (because I can’t end like a James Peterson novel) – the mystery bag had a fuel canister. The national park had “paid” the fisherman for his service that day by providing him something more useful than money. I wonder what the blog entry of ThaiGuyFisher43 looks like?

hey kenny...oh my dear...thanks for letting us come along with you...james patterson has nothing over you!...now, jk rowling is another story...i send you a hug, "kenneth". abby

i feel as those this days adventure could easy be spun into some type of "finding nemo 'lost in thailand'" cartoon movie. hmm.. its got potential. anyways...
keep on rocking it thailand style - sounds amazing. much love.
-aubs