(Please excuse the gross mispellings and lacgk of pictures. The keyboard I am using is missing 40% of the characters and the connection is slow. I will update it as soon as I can)

The monk leading the small ceremony indicated that he wanted me to come forward. I inched forward and placed my right hand on the large bowl of food as he had indicated. This was a time to follow directions.

I plunged the knife deep into the skin knowing that in order to be successful I would have to get it to bleed. The knife work was working, but for the next step I would need a different tool for the job.

The fish was gross. It had what looked like wood sticking out of its mouth, eyes popping out, and enough blackened spice all over it to make it look repulsive. As it sat there on the grill, I knew it had probably come from the muddy (yet mighty) Mekong River merely hundred of feet away. The conglomeration of strong and potent sea food odors was overwhelming.

With no plan and very few English speakers, the challenges were beggining to pile up. I wondered if I would be up to the challenge. And that was before the cobra...

Arriving in Nong Khai was pretty nerve racking as I had little idea of what to expect. A good sign, however, was that Dawn, a long time volunteer, was on the same mini-bus to the Openmind Training center that I was. Upon arrival I quickley met the staff of locals ad volunteer that ran and managed Openmind Projects, a grassroots program that organizes projects throughout Thailand, Laos, Nepal, and Cambodia. The cast:

Sven, a Swedish consultant, started the program to empower local people to benefit from tourism through learning English, computer literacy and sustainable, community-based eco tourism. Toto (or TT) is second in command and is the first Thai to be a part of the program back when it began. Despite few "academic credentials", Toto speaks both Englsih and Thai knows as much about IT and computer technology than any Bucknell computer science major (that is a compliment to Toto, not an insult to Bucknellians). Nik, Suriya, Khai and Orn provide both technical support and lead the training for volunteers in Thai culture, language and teaching. All three also do office and computer work. Ram and Dawn are both longtime volunteers who provided great companionship and advice (plus, Ram is a vegetarian...very helpful). Along with this crew was three or four local teens (18 or so) who served to both help us in teaching and speaking and hung around the center to learn English. They included Moss, Boom, Naan, and Gui amoung others.

Joining me in the training were three other volunteers: Ben, Andreas, Gameron and Bree (in their late teens and twenties from Malaysia/Germany/US/US respectively).

Through the training we learned basic Thai language and culture. Most exciting was when we were given a list of words and had to go into a market by ourselves and, using what little Thai we knew, ask people the words' meaning in Thai. "Nee riok waa aroi?" has become my official favorite phrase ("What is this called [in Thai]?"). People love a farang (westerner) spek their language and it simply provides a great opportunity for both parties to laugh with (oh please..at) each other. I would like to specifically thank the young woman selling jewlery in the first walkway who insisted on giving me almost my entire list of words. 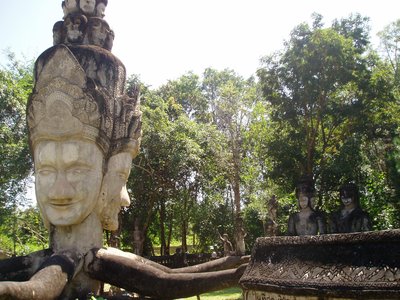 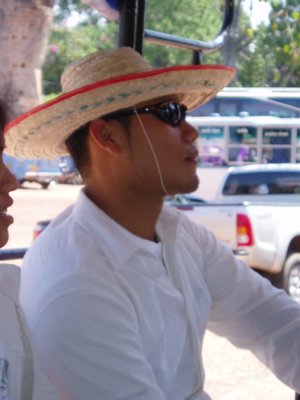 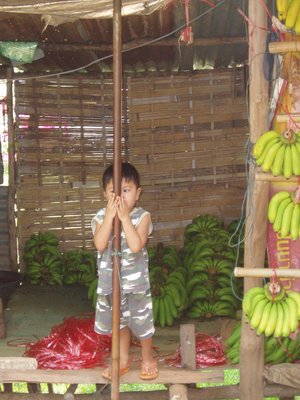 After this adventure, we met up for lunch at a small riverside resturaunt just outside the market. Nik had already ordered for us and on the table were three, large, wood-stuffed, blackened, Mekong fish. They were delicious. When opened up the fish had the tastiest, white meat I have had, completly in contrast to the outside appearance.. What can I say, never judge a book...

Also part of our training was Thai cooking. After going to the market (on our own) to shop for vegetables for which we only were given the Thai names, we brought back our produce and got to work on some Thai classics. It was my job to make Papaya salad. Equally as important as the 7 hot chillis was to juice, or "bleed", the papaya before peeling it. Toto quickly showed me the lateral slicing motion and subsequent artful slicing to obtain those long nice strips we all know (and if you don't know, go order some..it's good). I, however, quickly surrendered the knife for a modern peeler. Oh, the wonders of technology.

As our training ended, Bree, Cameron and Ben were off to their placement about two hours away at a remote village. Sven invited me to come and so I joined them. Two hours in the back of a pick-up truck later, I had seen the city streets change into beautiful countriside in which a small, basic village lay next to the Mekong. As I walked around the village it was the first time that I felt I could actually do this: go into a village on my own and converse with the people and feel moderatly comfortable volunteering there. While I have not yet been to my placement (which will be a bit different in a small marine national park), it felt good to be only slightly nervous and mainly confident- a testiment to our training. While I was wondering how I would fair at my placement, it was time for us to leave Cameron, Ben, and Bree, the latter of whom was rightfully nervous about the language barrier, loose plan for the project and the critters. On the drive out we saw a cobra. 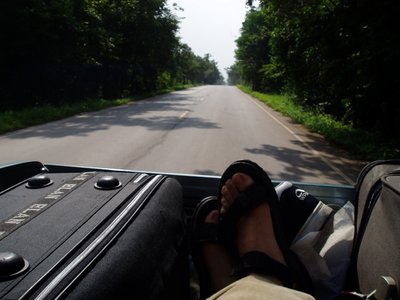 The next morning Gui and the others invited me and Dawn to a Buddist ceremony to offer the local monks food. I nervously accepted demanding of Suriya, "You better take care of me." Dressed for a piano recital, I entered the small temple with the others, shoeless, with food, and barely on time. Excited about foriegners joining them, the thrity or sopeople quickly waved us to the front of the small, three-walled sanctuary. A "bima" (excuse this comparison, but I can only reference what I know) of sorts raised only slightly was occupied on the left by a beautiful golden Buddha and various incence and such, next to which sat about a dozen monks ranging in age from about 18 to seventy five. As the serious, yet relaxed ceremony proceeded, we respectfully sat and bowed as the monks spoke and chanted and eventually got up to put the food we had brought in big bowls.

(I must stop here to address an issue that may have crossed a few of your minds. You might be thinking,"but wait, isn't Ken Jewish? What about no Gods before me, and Mordechai, and no idols? Well, I am quite sure that another Jewish teaching is to love and respect thy neighbor and I am quite confident that this falls into that category. Either way, I'm sure Buddha can put in a good word for me with God this weekend when they sit down to watch the ball game.)

After filling the bowls, the head monk motioned for me to come slightly forward and join the ten or so others who would be offering the bowls to each of the monks. I placed my right hand on the bowl and bowed my head slightly with the others and waited for the prayer to begin and end. That was a pretty long 5 minutes. What was I going to have to do? Say a prayer? Give a sermon? As it turned out, as I had quite honestly trusted, the monk had not put me in any sort of embarassing position. Handing to the bowl to one of the monks was enough to complete my duties and I was honored to have had such an experience. 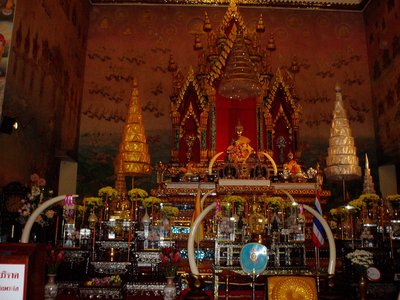 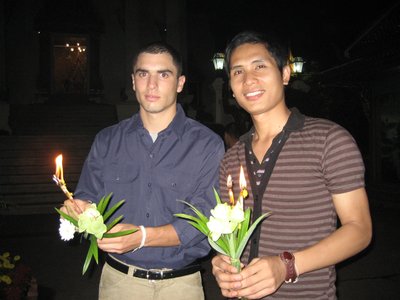 That night, my Thai friends and I enjoyed the rest of the festival on the rivier with the music, food, touring other temples, and fireworks. The next day, it was time to leave Nong Khai. While the global economy is in turmoil, the Greenbaums in Thailand Index has just grown 100%. I'm off to see Adena in Chang Mai... 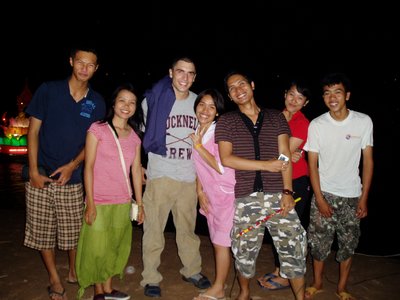 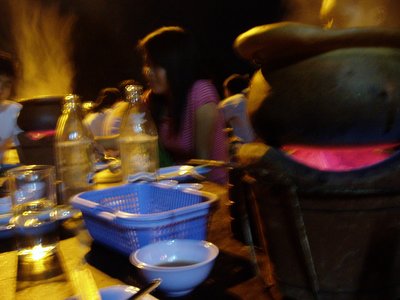 hey kenny...kenneth...nope, kenny...it's abby...worry not about the spelling...your words are bringing all the senses in to play while i'm reading...keep it all coming, you amazing guy...i send you a hug from the u.s. of a!