Jau about a trek in the woods?

We went to the forest,
To see the mountain folk,
This was serious trekking,
Through real jungle, it was no joke.

We climbed into a truck,
A pickup with seats in the back.
There was no AC or seatbelts,
But hey, cut them some slack.

The ride started off as expected,
A bit bumpy but not insane.
But once we left the city,
Then the real ride came.

Taking bends at 50,
The truck was like a comet,
Over the hills we flew,
Causing Adena to eventually vomit.

So they let her move to the front,
The trooper that she was,
I was feeling ok,
But the mountains brought the buzz.

I started to hate this driver,
This man (boy) I had never met,
Did he even have a liscense?
He knew no rules to forget.

If the drive was a candidate,
He would certainly be McCain,
Both should not be driviing,
And both are clinically insane.

My ass was getting number,
My stomach in a befuddle,
This guy should write to NASA,
To provide training for the shuttle.

The guys who ride a barrel,
Over Niagra Falls,
Could never ride in this truck,
For this they do not have the balls.

The wheels finally stopped turning,
It was time to eat lunch as a group,
And what was put in my face?
Smelly, hot, pork soup. 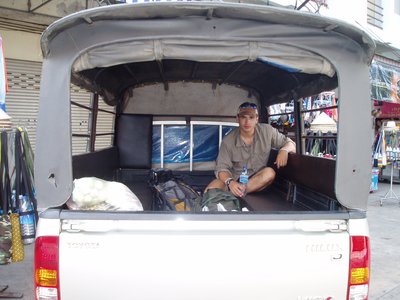 And so the trekking andventures in Chang Mai began. Adena (my sister) and I had met up in Bangkok to fly to Chang Mai, one of the larger tourist cities with plenty of guesthouses and trekking. After signing up at our guesthouse for a trekking trip the next morning, we went for a walk only to discover a more interesting guiding company. Pooh Eco-Tours (no, the guide was not Christopher Robin) offered a trek through a more remote part of Thailand, further from Chang Mai. The typical elephant rides and bamboo rafting was replaced with a homestay in a mountain village, more time spent on history and ecology, rougher trekking, and a more authentic experience. While the 3 hour truck ride was authentic in its own way, the rest of the trip was excellent.

After "eating" lunch, we began a hike down a steep, densely covered mountain slope with Sam, our guide from Pooh, and Nuk, a farmer from the Karen village we were going to. The four hour hike (everything in measured in time, as measures of distance are quite useless for mountain villages if you think about it) brought us through rice fields, down to a river, then back up to the Karen Village. 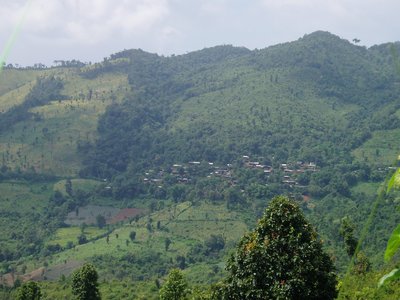 The Karen people are amazing. They farm rice and other vegetables on what are literally the sides of mountains. Cows, chickens and pigs supplement their diet along with a bit of hunting. The road to the village is farely recent (ten years old) along with minimal solar electricity for each house, a few motorbikes, and a handful of trucks. Despite this small influx of technology the people lived quite traditionally with wood homes, subsistance farming, fire-cooked meals, children leaving school in their teens to work in the fields, and mostly traditional dress. 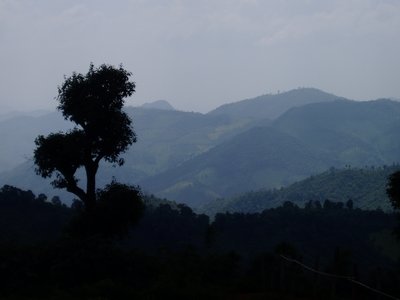 The first night we stayed with Nuk and his family in what was a basic, raised, two-room home with a fire pit kitchen and animals hanging out beneath the kitchen (clean-up was easy as all we had to do was sweep our crumbs between the floor boards). This night gave us a great opportunity to learn about the culture, ask questions (through Sam), and enjoy a bit of rice whiskey. It was apparent that while life was hard and simple, the people were clearly content. As Nuk said when asked if he enjoyed life in the village,"Here, everything I need I get from the mountains. I don't need to worry about money." Their lives may certainly be more difficult than ours, but it would be wrong to categorize it as "worse". 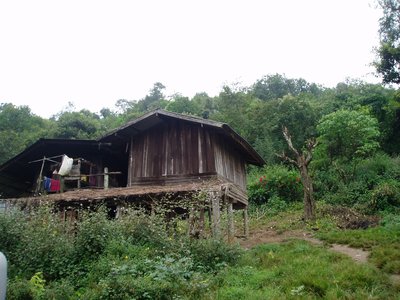 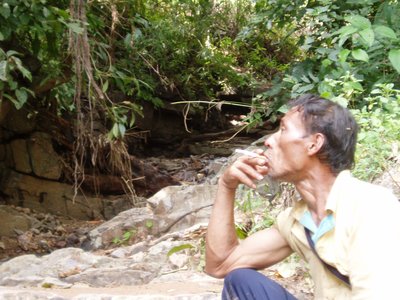 The two days took us into the mountains of Thailand where I would describe the environment as where the forest meets the jungle. While the jungle had lots of things that could kill you, we were in good hands becasue we had part of the jungle with us. Jau was also from the village and makes Bear Gyles look like a soccer mom. With a single machete-type knife he cut down bamboo trees, carves cups and utensils for us, and helped cook almost all of our meals. He had quads of steel. If I had to choose between his quads or Lance Armstrongs, I would choose Jau's every day of the week and twice the Sunday before the Tour. There was Jau, in his Walmart clearance rack crocs, old T-shirt, with his knife tucked into his small traditional pouch, carrying a twenty-foot bamboo log and a carton of eggs with a banana leaf cigarette tucked behind his ear, in his underwear.

Then his cell phone rang. Some things are inescapable. Needless to say, Jau was awesome and simply put, we would have died without him. After a night in a camp near the river, we hiked out through an amazing cave (no Petzl headlamps here, all bamboo torches) and up and out of the mountains. The experience was amazing and Adena lost only one toe. All kidding aside, the leaches, heat, humidity, rivers, bats, language barriers, cow shit, and pit toilets, etc...this trip was right up our alley. 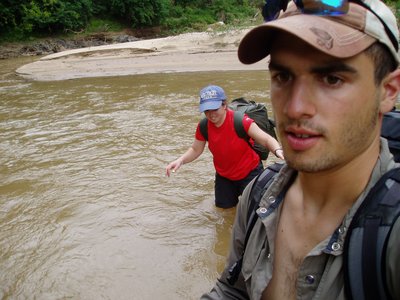 The trek has once again proven what I beleive is as much a law of the universe as gravity: the best things in life are earned. 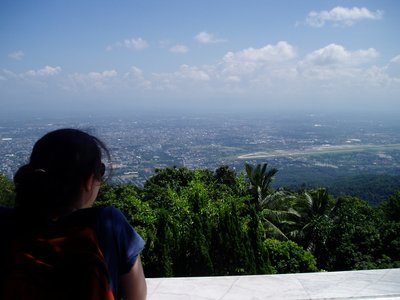 Posted by Jazzob 21:00 Archived in Thailand

Kenny, simply spectacular reporting...thanks for letting us get a glimpse of this incredible world you and Adena are getting to share...talk about a sibling bonding experience...omg. I send you both lots of hugs. Abby

Hey Buddy. Sounds like an awesome time. At least a good enough time to warrant a poem that includes references to ass, NASA, mccain, and balls. haha. Glad things are going well. Not much new here in the states... except some presidential election thing. i'm sure you've heard the news. The Daily show with john stewart said that there were newspapers that were calling the election in favor of obama before the polls even opened in the US. It was a great night. anyway, enough politics. Enjoy the trip. and pick up some pointers from that Jau dude. seems like he knows his stuff. catch ya later.
-Olaf