(The title is not self-fulfilling. Google it with quotes. And if you don't need to Google it, then you know who you are)

"Yes, but which floor is the hostel on?"

"One, two, three, four?" I indicated the floor levels with my fingers.

After riding the elevator for a few minutes, it turned out that "Pae!" meant "third floor", either that or "leave me alone." After a 16 hour plane ride I was finally in Hong Kong. While I didn't get ino the hostel until about 11:20pm - excuse me, 23:30 - local time, I had already had quite a bit of fun.

I decided to give up my valuable ailes seat for a middle seat on the plane. Why would I do that, you ask? (many of you who know me already know the answer.) Merav and I had started talking at JFK. As it turned out, she was flying to Hong Kong, too. She is a beautiful, smart, funny, young lawyer living in Hong Kong (did I mention that she ordered a vegetarian meal?). She told me that she is Israeli, but I think that's a lie; she's actually from heaven. Needless to say, we go to know each other well over the course of the flight, went out for dinner the next evening (after the hostel episode), watched the Hong Kong skyline light show, and went to a jazz club. Hong Kong was fun.

Earlier that day I had breakfast with two guys from the hostel. Ben (from Utah), Ronald (from Amsterdam), and I were eating in a second floor fast-food resturant when a guy outside the window started climbing a bamboo pole. He was up at least 15 feet and had literally leaned the pole against the building like a ladder (minus the ladder) and climbed up. His partner passed him another one from below and he proceed to tie them together to create scaffolding. "There aren't many regulations here," Ben said, making me even more confident in the quali of my breakfast. "Yeah, lots of those guys fall to their deaths," Ronald added in. Who knew one could grow to appreciated OSHA. Even more amazing was later when I saw an entire skyscraper surrounded with this bamboo scaffolding. I guess in someways it very much is reflective of how the old meets the new in a place like Hong Kong.

In addition to these adventures I was able to see a decent amount of Hong Kong in one day by simply walkin' around. I took the tram up the Peak, the highest point with a great view, took a ferry across to Kowloon, and found the zoo (which I think was free because I turned into what I thought was a park and was suddenly staring at a ringed tailed lemur). Aside from being offered cheap Rolex watches constantly and hashish (twice in 5 minutes), it was great just walking the streets.

I'm in a guest house in Bangkok now and tomorrow I'm heading to Nag Khai. And Thailand Chapter 1 begins.... 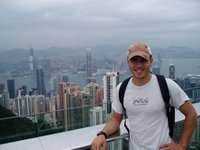 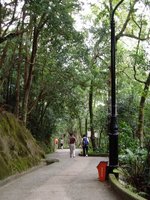 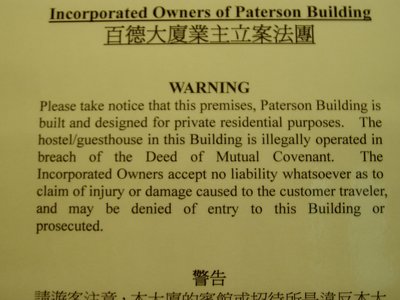 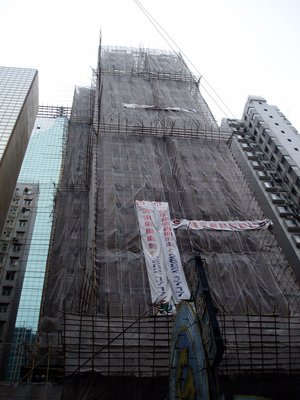 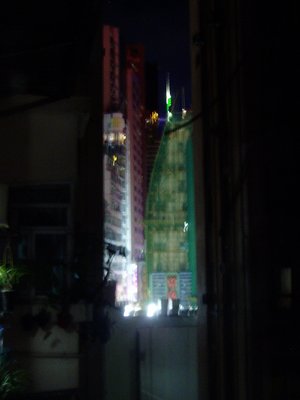